A beginner's experience with TLAPS (The TLA+ Proof System)

The resources in my first TLA+ post were extremely useful to me in understanding the TLA+/TLAPS syntax and semantics, but I found each source individually to be either too focused on specific examples or too general. This post will focus on interleaving examples of increasing complexity with the syntactical constructs in the language.

3.2. Writing proofs in the TLA+ Toolbox

I find there are two classes of constructs when using TLAPS:

For TLAPS, the theorem would be written as:

Putting both theorem and proof together, we get:

What caused some confusion during the process of learning TLAPS was that:

So the proof above is equivalent to

In the TLA+ Toolbox: Use Ctrl+G Ctrl+G to prove a particular step of a theorem. The theorem and its associated steps turn green if the proof backends prove the theorem with the proof that’s been given.

Here, we declare 3 new identifiers (X, Y, and Z) and declare their domain to be the Natural numbers (this requires an EXTENDS Naturals at the top of the .tla file)

Is this an obvious proof? In general, I try to use PROOF OBVIOUS every time just in case TLAPS can figure out the proof without any additional information. Here, the set of facts available to prove X > Z + 1 is X \in Nat, Y \in Nat, Z \in Nat, X > Y, Y > Z. So is TLAPS able to figure this out without any more information? 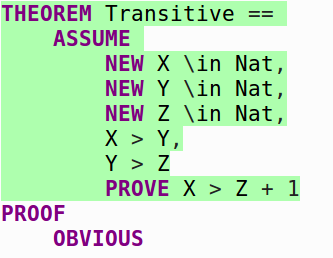 Looks like it. Adding PROOF OBVIOUS to complete the proof is sufficient for TLAPS in this case. Let’s move on to a slightly more complex example.

We want to prove that 4 and 9 both have a square root. Pretty easy, but we also want to define a generic operator to check if some variable has a square root. Our implementation will be:

So our proof here could be stated in one step, but it’s a good time to introduce the idea of structured proofs. These are multi-line proofs that can have step numbers and refer to each other. Each step is its own proof obligation, i.e. something that has to be proven as well, and proofs can be nested inside other proofs. This is too abstract to understand from a description, so here is our example proof for THEOREM TheseHaveSqrt.

TLAPS would highlight the step in red.

TLAPS does not expand definitions by default. In this case, the back-end provers will see the opaque symbol HasSqrt and have no idea what to do with it. If we check the Interesting Obligations window in the TLA+ Toolbox after trying and failing to prove this step, we see this information:

What this means is that our three backend provers (zenon, Isabelle, and smt) failed to prove our highlighted obligation (<1>1 HasSqrt(4) /\ HasSqrt(9) OBVIOUS). The information sent to the provers was:

This is an extremely important tool. We can now tell that the backend provers see the operator HasSqrt but not the definition behind it. If we were to correct our <1>1 step to:

We would be asking TLAPS to use the expanded definition of HasSqrt, and the information sent to our provers would essentially be:

We wouldn’t see this: the Interesting Obligations window doesn’t show up when something has been successfully proven. This does illustrate the mechanism used by TLAPS to keep the number of facts low: only those that are specifically said to be needed are used for a step. Let’s look at our theorem and proof again:

Every structured proof ends with a QED step, which basically brings together all the proof steps in the rest of the structured proof with the goal of proving the current theorem. In our case, saying

Is saying that “We can prove the goal HasSqrt(X) for X in {4, 9} by adding the fact <1>1” into the proof. The QED step itself requires proof (therefore QED OBVIOUS is a possible step), in this case, we’re saying “Assuming <1>1 is true, we have proved the theorem”. Given the wrong facts to QED will cause this step to fail, for e.g. QED BY X = 5 in this case. Once we correct everything, we get:

We want to prove an interesting theorem:

First we need to define what it means for some value to divide another. We will define it as:

Let’s state the theorem as specified:

There are a lot of new concepts, and we will explore them step-wise.

Step <1>1 states that for the rest of the proof, we are going to PICK a value k such that B = A * k, and we state that the reason we can do this is due to the definition of Divides. This makes sense: we said Divides(B, A) which implies B = A * k. Why didn’t we say <1>1 \E k \in Nat : B = A * k BY DEF Divides instead (\E vs PICK)? \E k... makes the definition of k local to only that step, PICK makes k accessible to the rest of the proof when we include the step elsewhere. Maybe it can be thought of as a private variable (\E k) vs a public variable (PICK k).

Step <1>2 is pretty much identical to step 1, just that we are doing the same thing for C.

Step <1>3 is the first proof-less structured proof step that we have encountered. This can be thought of as equivalent to “for all y in Nat…”. Note the difference here: TAKE is like for-all and doesn’t require proof, PICK is like there-exists and does require proof.

The next three steps are basic arithmetic to achieve the form (B * x) + (C * y) = A * (some natural number). After this, only one last step is necessary to complete the proof:

So using fact <1>9, we are able to finally prove our theorem. 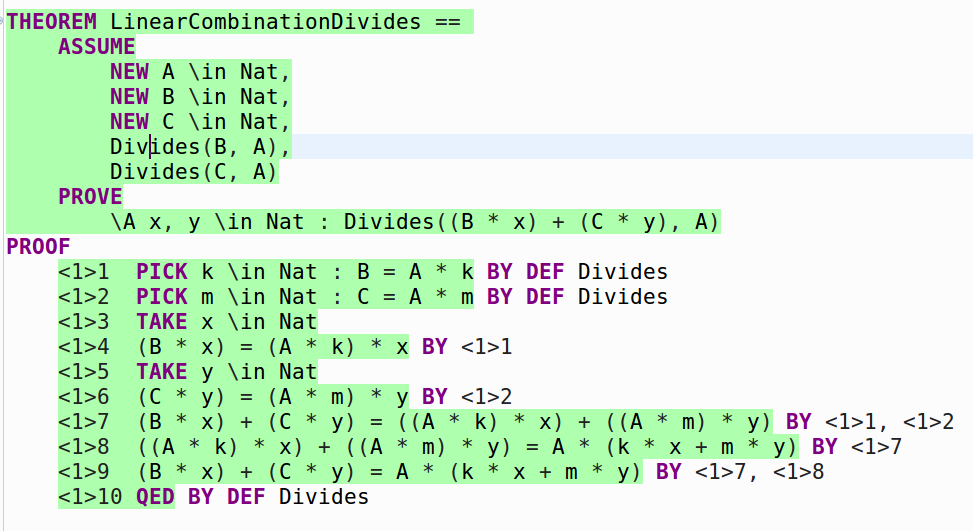 7.1. Not following my own advice

While this example shows the methodical steps behind structured proofs and how to refer to previous steps to prove the current step, TLAPS was actually much smarter than I gave it credit for. I noticed that some steps of my proof were redundant when commenting them out, and then after I removed all of them… 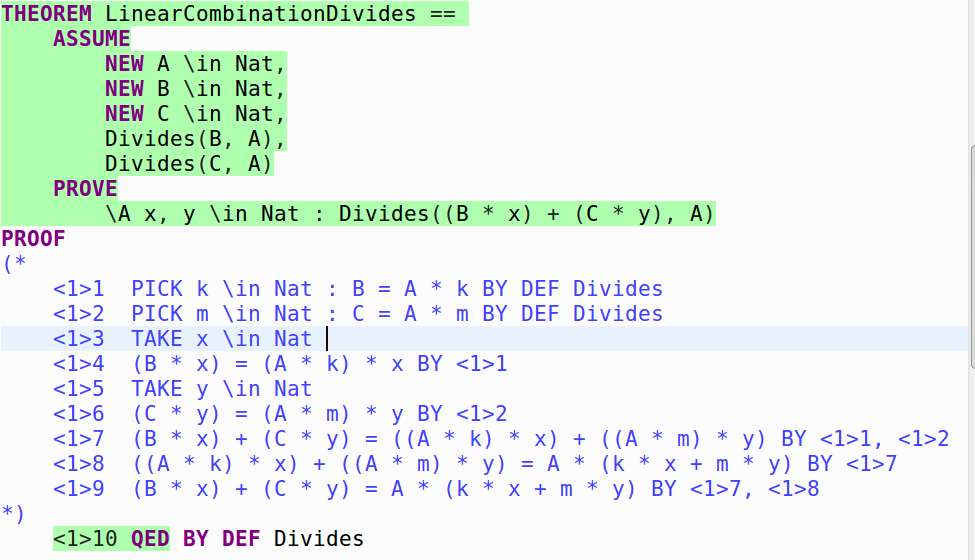 So actually, supplying the definition of Divides to TLAPS was sufficient for the backend provers to prove this theorem. My original definition of Divides had an extra d <= n constraint that I removed while doing some other proofs, since it was an unnecessary constraint, and that was one of the things that made this proof obvious to TLAPS. The lesson to learn here: always check the OBVIOUS and BY DEF <..relevant definitions..> proofs first before trying to prove anything else.

TLAPS is a really useful proof system that forces users to write rigorous mathematical proofs. After a while, it mostly feels like working together with the proof system to achieve some goal, as opposed to struggling to teach it some obvious fact. The main window into what the proof system is “thinking” is the Interesting Obligations window when it can’t prove something. I intend to combine my models in standard TLA+/PlusCal/TLC with TLAPS, since we are just scratching the surface of the proof system in this post. It’s also capable of checking temporal logic to a degree, and can handle induction over the natural numbers, among many other capabilities.

To continue learning TLAPS, the resources on TLAPS from my initial post on Learning TLA+ were my main references. I’m not reproducing those references here, in order to limit any updates to the list to just that post. I’d recommend reading through those resources multiple times in different orders until more of TLAPS begins to make sense.