Most of this writeup is adapted from my GitHub project. I figured that it’d be easier to consolidate everything here.

My first two projects in Haskell were a multi-core cache coherence protocol simulator and a a solver for the game Boggle (still being optimized!). I kept running into performance problems like:

I gave up on optimizing my first project, the Boggle solver, for a while. I began optimizing my Haskell projects once I worked on the simulator, since that was a project for a university module and I had to make it work somehow.

Here is a methodology that worked for me.

Step 0: What problem does your program have?

Identify the rough issue your program is facing. On Ubuntu, I run my Haskell program first, then execute

to get a rough idea of how my CPU and memory are being utilized. You can use your preferred system monitoring tool (Task Manager for windows, or just top, etc) to get similar results.

In my case, all of my cores were being utilized quite heavily by my executing Haskell program, and the dangerous indicator here is that my memory usage (“Mem” in the image) kept rising past the current usage levels to near 15GB, where I would run out of RAM - and the program was still running!

This was a classic space leak - my program did not need to continually allocate more memory because the size of the data it was working on did not increase, and the final output was not proportional to the runtime.

This will likely get you an immediate speedup and in certain cases where the compiler can identify certain optimizations, the space leaks might disappear too.

I added this in the ghc-options portion of my .cabal file (I’m using stack).

After this step - go back to htop or your system monitor and see if anything has changed. In my case, the program was not significantly faster, nor did it solve my space leaks. If this is the case, more rigorous profiling is necessary.

Step 2: Enable profiling with your builds

If you’re using stack, you can add certain options to your stack build command, e.g.:

If you’re using other build tools or ghc directly, have a look at the list of references to see how to enable profiling. Also note that profiling may slow down your program - if you’re looking for the best execution time after you’re done optimizing, turn these and the runtime options off.

This attemps to answer the question: are we spending a significant amount of time garbage collecting over doing useful work?

Going through each of these options:

Out of this data, we are mostly interested in 3 numbers:

These are numbers after some optimizations were done - my initial productivity was less than 20%! This is a good indicator that the garbage collection being done was to the detriment of the rest of the computation.

Step 4: Where is the garbage?

Now we need to identify where the garbage collector is working the most. We first need to generate a .prof file with data about where the program is spending most of its time, and where most memory allocations happen.

The only new argument here is -p which outputs data about the “cost-centres” of your Haskell program - an area of code that is held responsible for time and space allocations. These are automatically set by the compiler but you can manually annotate some suspicious areas as well. 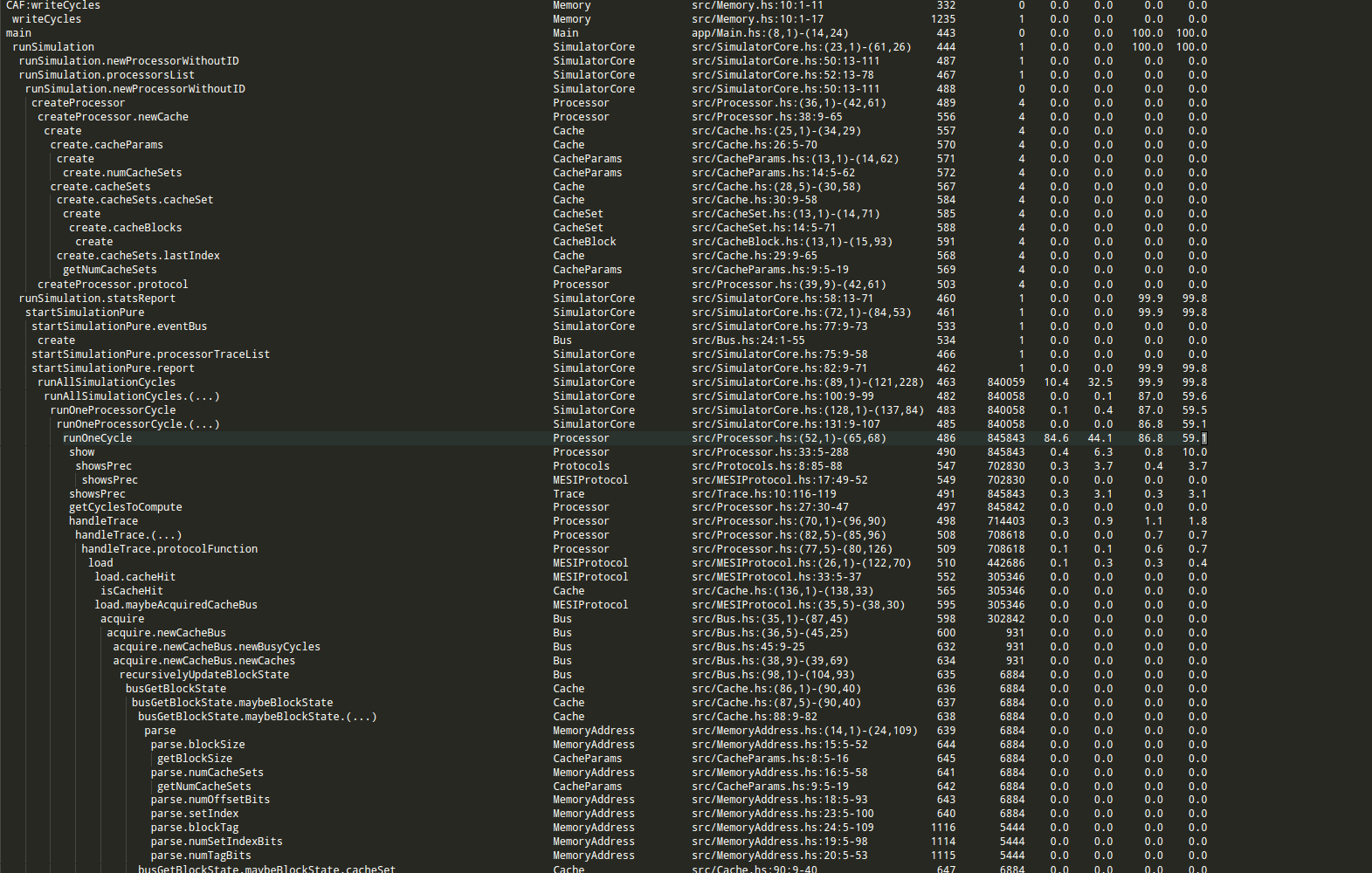 Even with the indentatation, this is a bit hard to parse.

I installed profiteur to make the output prettier:

a program that can transform profiling output from .prof files into .html which can be viewed interactively in a browser.

I also created a simple shell script to run profiteur and display the results in Google Chrome:

This finally gave me output that I could interactively click through: 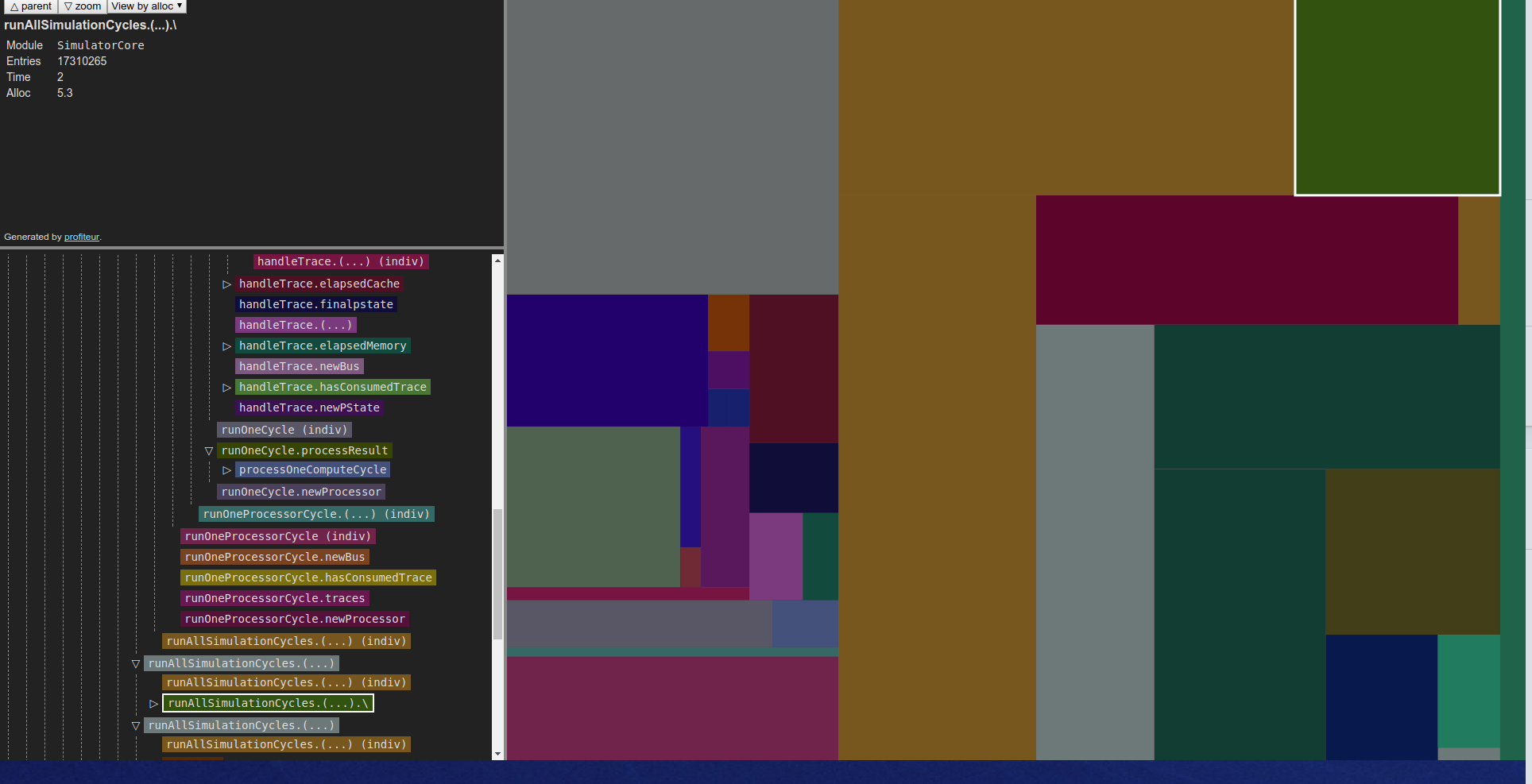 In Profiteur, you can select whether you want to sort the cost-centres by the overall proportion of time taken to execute it or the amount of space allocated within in. The size of the box on the screen indicates the proportion relative to other cost centres.

Attempt to optimize the problematic functions first - this gives the best return on time investment when trying to settle performance issues as I found out.

Profiteur gave me an idea of where the problem areas in my code were, but nothing that I didn’t expect (most of my problems were in the large main loop). I went on to use other profiling methods to find more precise problem areas.

We want a time-based graph of memory usage that updates dynamically. This is possible to get with GHC’s wonderful tooling and some other programs.

You’re going to need Ghostview (gv) (tool that was installed with my Ubuntu system), and hp2ps (should be installed with stack). Prepare a shell script like this (which I called live_heap.sh) (referenced from here):

(Note: sometimes the hp2ps to gv pipeline doesn’t work (it didn’t work for my -h option)). You can also use hp2pretty (serves a similar purpose as hp2ps but outputs a .svg file instead) by stack installing it and using watch to keep looking at the .svg file that it outputs.)

Now run your program with the -hd option to begin populating a .hp file of the memory usage over time broken down by closure description.

Finally, run live_heap.sh (or whatever you called it) to begin viewing your graph live! 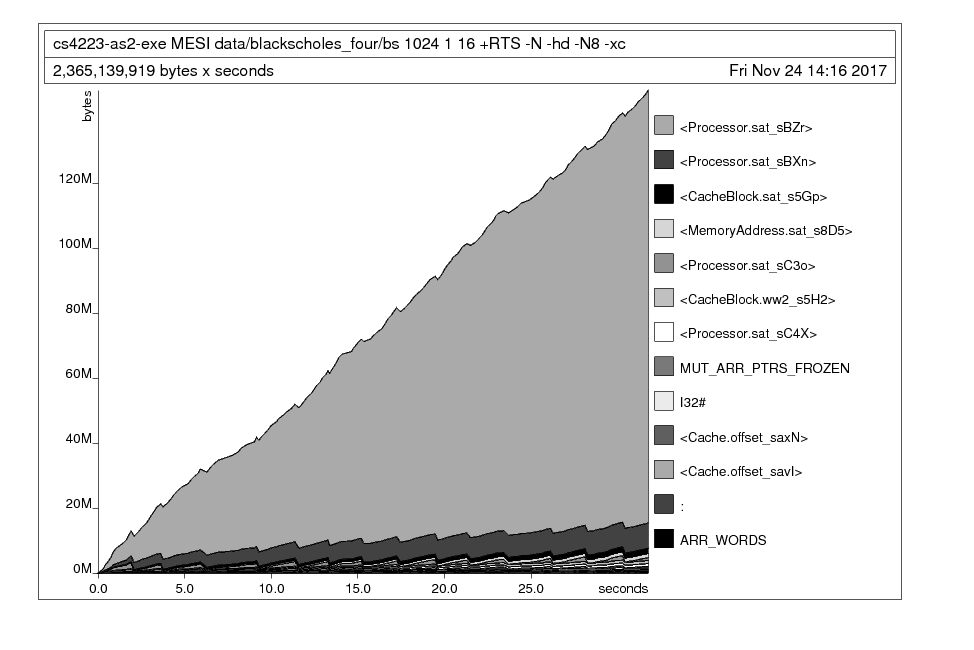 It was clear that a certain Processor instance of mine was eating up all my memory.

Step 6: Gathering even more intel with the -hy option

Now we can break down the graph again by type - this gives the most targeted information about which data type is giving us the most trouble. 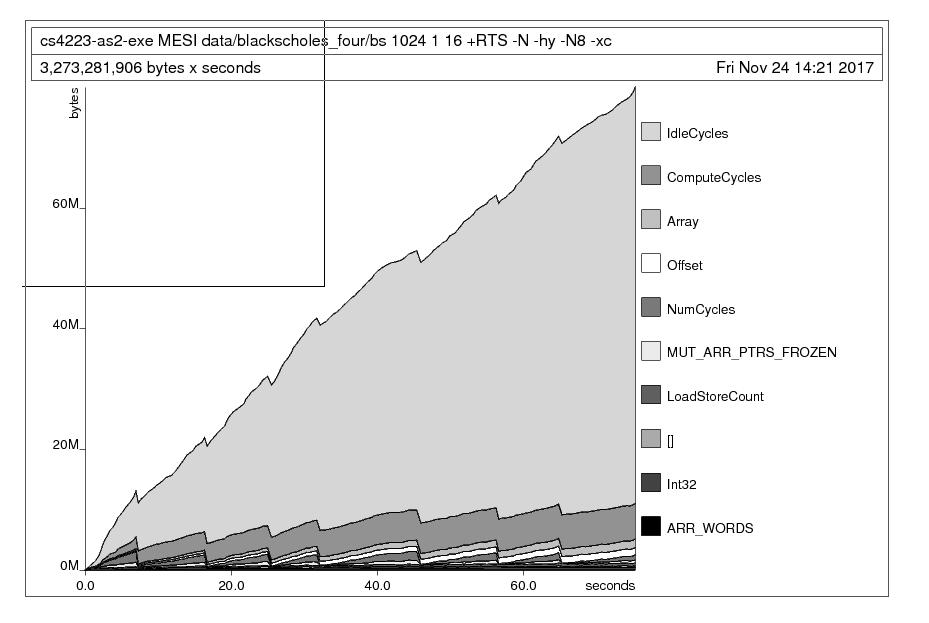 This made it abundantly clear that the memory leak was mainly due to my IdleCycles data type!

There were two main things that worked for me.

In my case, a data structure was constantly changing on every simulated “cycle” of my program. One of the main culprits (as seen above) was a data object called IdleCycles that was tracking an integer statistic by incrementing it every cycle.

I enabled GHC’s BangPatterns extension and began to annotate functions that mutated the IdleCycle type with strictness annotatations (the ! symbol) to force the thunks to be evaluated. This technique applied to many other data types solved a large proportion of the problem.

The simulator used a large data structure (Haskell’s Data.Array) of many nested sub-structures (some lists, some more Data.Array-s). Every cycle, as some of this structure was modified and the rest were not accessed, a lot of copying had to be done and a lot of lazy evaluation was occuring with built up thunks. Our stopgap solution was to change to Data.Array.Unboxed, a drop in solution for our use case since our storage type was Int32 - and we suddenly had less overhead in time and space. Other options for improving this data structure could have been Data.Array.DiffArray, Vector, or STArray/STUArray, perhaps even IOArray.

I recommend very carefully choosing your backing data structure and consider the monad you intend to work in if you want to use mutable arrays.

Repeat steps 3 - 7 until all of those problems are resolved! If performance problems still exist, do try looking at the reference material to try more profiling options.

Hopefully some of these ideas have worked for you as they did for me. I will update this as I come across more techniques to optimize Haskell programs in the future. In the meantime - do drop a PR if you want something else added!